En 2014 I started out on a project to prepare a book on Palestinian theaters with a group of Palestinian actors. Seven years later, in December 2021, “Acting Out: Voices from the Theatre in Palestine” was published in East Jerusalem, and the French version, “Voix du théâtre en Palestine” was published in Paris. Little did I suspect how life-changing this project would be and how important the book would be to Palestinians. After my second visit to Palestine in 2016 to interview Palestinian theatre people and take photos, I decided not to return until the book was finished. That moment came a year after publication, in November 2022. What follows is an after-the-fact journal of my observations, feelings, and analysis of three extraordinary weeks in the heart of human experience as we reconnected with what had become old friends and familiar places.

This was first posted on Facebook with the following introductory words:

It has been 6 weeks since I last posted on FB. Now, as 2022 comes to a dismal end, and we face 2023 with justified anxiety, I am driven to write and to return to FB. Events in Palestine overtake us. Since our return, there have been increased attacks on Palestinians by Zionist settlers in Hebron, several Palestinian youths have been killed by Israeli forces in Ramallah, East Jerusalem and Hebron, the Franco-Palestinian lawyer, Salah Hamouri has been expelled from Palestine, home to his family, after several 6 month-long “administrative” detentions (imprisonments), and there is the “new” Netanyahu right-wing government in Israel, just to mention the most dramatic events. So, although my personal experiences seem inconsequential in the face of the increasingly violent Israeli occupation of Palestine, I wish to share them with you.

On arriving in Palestine, I was unexpectedly overwhelmed with emotion. Each movement, each encounter was loaded with memories or new sensations, like a fast-moving kaleidoscope. Trying to put the spontaneous emotional impressions into a coherent Cartesian whole was impossible. I made several attempts to write posts, but none got past a few sentences. Now, here in the bucolic French countryside, the words have finally come to me. As in a film where the action and the sound are not synchronised, here is my account of events and feelings, days after the action.

What was it about Palestine? Why was I so taken by it? In the heat of the moment, I felt like a child, giddy from the stimuli which bombard me and destabilised me. It was in Hebron, a week after we had arrived that I began to understand my unease: the contrast between the warmth of old friends and easy human contact with strangers, and the dreadful context of a violent occupation which has become a vicious and sinister apartheid. It is indeed disturbing to be at once so at ease, so comfortable in the middle of one of contemporary history’s most socially and personally destructive environments.

After being whisked out of the Ben Gurion airport, across the 48 (see below), and into the maze of Jerusalem streets and the traffic (which magically never freezes up) we arrived at our lodgings in the Ras Al-Amud neighbourhood southeast of the Old City, next to the Mount of Olives. It is the family compound of Mahmoud Muna of the Educational Bookshop, the publisher of “Acting Out.” It is a complex of 9 apartments in 3 interconnected buildings housing 50 members of the Muna family; parents, 4 brothers, each with an apartment, numerous grandchildren, some old enough to have their own apartment, and lots of great-grandchildren.

The emotions which our return to Palestine after an absence of 6 years has produced are indescribable. I am drunk with happiness. So much so that I think that even strangers are equally pleased to see me. I talk with everyone: kids on the street, shopkeepers, other customers, passers-by, anybody who looks like he (more rarely she) could be in friendly agreement with my enthusiasm.

And here in Palestine it works! I don’t want to be naive; the occupation and the distorted vision of Palestinians as a collectively dangerous, if not terrorist people which its propaganda and the mainstream media has produced, has succeeded in reducing the numbers of foreign visitors to a minimum. So, any “internationals” (visitors from outside the Middle East) like us are more than welcome, especially if we express genuine solidarity with Palestinians and their struggles. But beyond this there persists a culture of openness in Palestine, a welcoming of strangers, and a respect for the “other” which our contemporary individualist ideology in Western societies is rapidly destroying.

The streets here are very narrow, and sidewalks, if they exist, are more for trash bins and parking than for walking. The dead-end street where we are staying joins a very steep and narrow main road, and when we went out for our first walk, a taxi driver was trying to park as close to a wall as possible. I gave him some hand signals to help, and when he was parked, he opened his window to say thanks. He could tell that we were visitors, so he asked where we were from and welcomed us, offering his services obviously as a businessman, but also with a genuine concern that we be cared for and that we get a positive view of his country.

On the busses and collective taxis, which we often took, we were easily identified as internationals. That, along with our age, gave us a special status, and we were constantly afforded extreme politeness and concern. In crowded busses places were given up to us, people watched to make sure that we got off at the right stop, and that we didn’t forget anything. People weren’t just being polite; they were taking care of us.

Stores, even the super-markets are more than commercial enterprises, they are community centers, aid stations, communication hubs and friendly meeting places. And there is always someone, a customer or employee, who can speak English and is only too happy to help. What would normally be a simple transaction becomes a socio-political discussion; where are you from, why are you here, how do you like it? Of course, our political sympathies go a long way in creating an authentic desire to help. And help we get, from advice on products, to prices and even in “negotiations.” On one occasion, two stock boys saw me standing outside their store waiting for Marie-Renée. They brought two crates for a seat and gestured for me to sit down.

“Welcome to Palestine!”, which we constantly heard, is not just a saying.

Under the Israeli occupation, Palestine has no direct transportation links to the outside world, no airports and no boat, train or bus service. To reach Palestine from any international origin one is obliged to pass through the “48.” Like many Palestinians I call Israel the 48 because in 1948 the territory which Zionists claimed for the self-proclaimed state was universally considered to be part of Palestinian territory, even if there was no official state on the land. I am not denying the existence of Israel, I am only keeping clear the nature of that existence, and the price which Palestinians have had to pay for it. 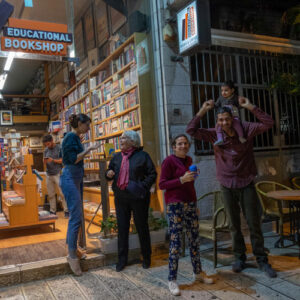 Marie-Renée with some of the Muna family at the Educational Bookshop. 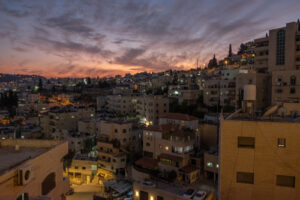 View of the Ras Al-Amud neighborhood. Our apartment is to the right of the steeples on the right. 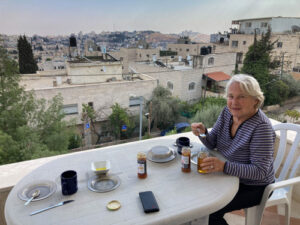 Breakfast at our apartment in the Ras Al-Amud neighborhood of E. Jerusalem. 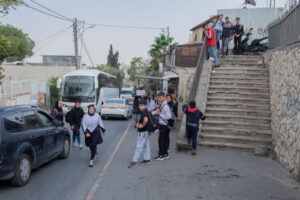 Kids getting out of the public school at the top of our street. 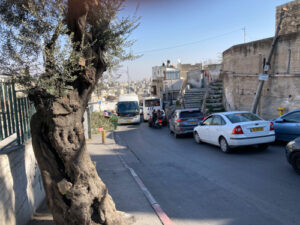 The Old Bethlehem Rd. Our bus stop is just past the tree. 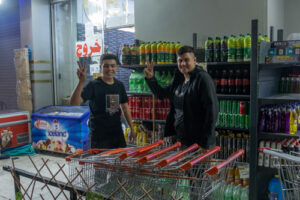 Two clerks who made me a stool to sit on while I was waiting for Marie-Renée to do some shopping.