ACTING OUT: Voices From the Theatre in Palestine 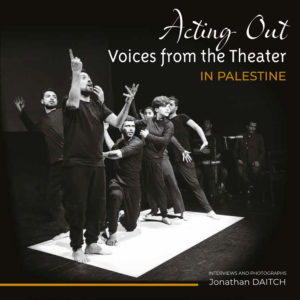 I don’t know what has brought you to this page; personal interest, political activism, interest in theatre or Middle Eastern culture, or by accident. Whatever it is, you are most fortunate to be here; you have discovered a unique book on Palestinian theatre and sumud: steadfastness.

“Interviews” hardly describes the encounters I had with Palestinians; passionate, intense, politically incisive, and ultimately personal. Inevitably, what began as interviews with an established set of questions, became transformed into spontaneous, authentic exchanges about the lives, experiences, and hopes of a group of people whose commitment to art and to freedom have become the true inspiration for this book. When I say that my interlocutors are really my collaborators I am not just talking about the fact that their words represent 90% of the text. Those words, and not my ideas, are what give this book its sense and its sensibility. They are its soul.

Welcome to the marvelous, magical world of Palestinian theatre! 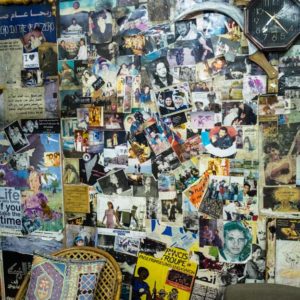 Acting Out is a book created with 50 men and women of the Palestinian theatre community representing 26 theatres, and Jonathan Daitch, a photographer and activist living in France. 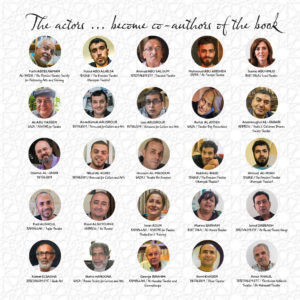 It is a collection of personal reflections derived from interviews undertaken in 2015, 2016 & 2017 in 26 theatres in 11 cities: Bethlehem, Beit Jala, Jerusalem, Ramallah, Al-Birah, Hebron, Jenin, Jaffa, Haifa, and Maghar, in Gaza through Skype, and in France during tours. During our interviews the actors, actresses, directors and theatre managers talked openly about the joys and the difficulties of doing theatre in Palestine. These testimonies provide authentic, intimate, and experienced views of contemporary Palestinian culture and daily life, affected but not diminished by the Israeli occupation.

The nature of theater and its place in society

“Theatre for me is a very pure place. I said earlier that all theatre is political in its nature. But you cannot make theatre as a political act; it must be a theatrical act. You must begin as an artist even if you end up doing something political. Sometimes you are inside a dark room and you have one light, a candlelight. You can see this light. This is a theatre for me, a small light in a dark room.”

The impact of theater on young people

“At Alrowwad, we see the arts, and particularly theatre as a means of creating space for children to express themselves in peaceful and nonviolent ways. Through this we challenge the negative images of Palestinians propagated by the media. For example, the children are able to share stories that their families narrated to them about their villages, including the reality of being attacked, of populations being massacred, chased away and forced to leave. They become aware of their own history and can express their true national identity. Theatre, art, filmmaking, and storytelling are the means of teaching and talking about the almost 70 years-old ongoing tragedy in occupied Palestine, and about the generations of Palestinians born as refugees, sometimes, as in my case, even in their own country.”

“I am both a resister who uses theatre as a tool, and an artist for whom theatre becomes resistance because of our situation. Our spirit and identity are always present in whatever we do. Wherever we go, people ask me about myself, and I say, “I am a Palestinian who does theatre.” The word “Palestinian” is always present. It is not a commitment as much as a responsibility. So, we must find our stories in the street; firstly, that we suffer from the lack of freedom of movement–all the rights that are taken by the Occupation because we live behind walls. Then the other stories will come. Whatever we do, it is our responsibility to show who we are. We share some of the same struggles as other peoples, but certainly resistance has an important place in our theatre.”

Specific problems of doing theater in an occupied country

“The main difficulty for theatre in Palestine is that we don’t have stability. Some instability can be good; it pushes you to be creative. But for us it is all the time, and it is too much. You always have to find your way around things in order to fund yourself and your theatre. You work to do theatre in schools and make contact with people who can keep you going. You have to find your way.” 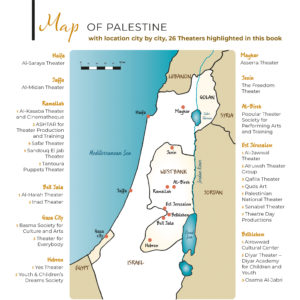 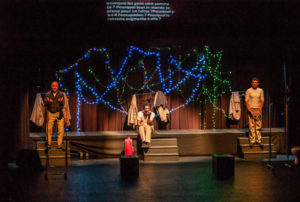 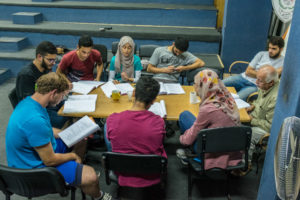 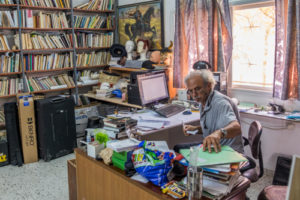 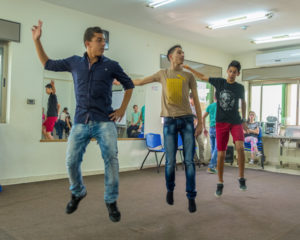 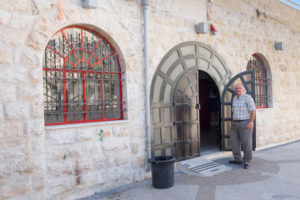 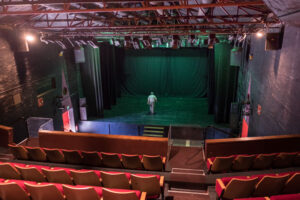 … and the Tantoura Puppet Theatre based in Ramallah. 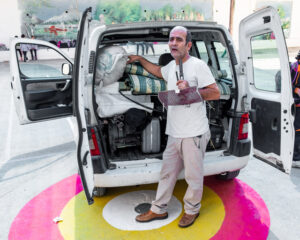 Nidal Khatib with the Tantoura Theatre in a van, September 29, 2015 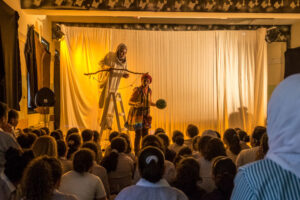 Acting Out is approximately 200 pages with 70,000 words and 220 photos (of which 150 are small black and white portraits accompanying the texts). 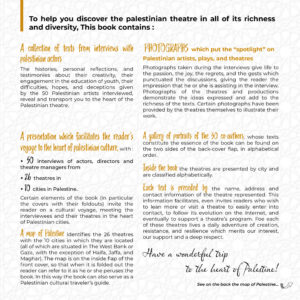 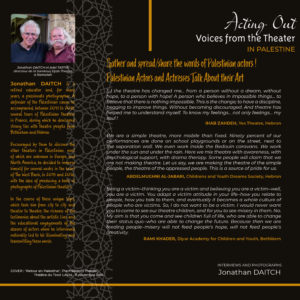